COVID19 pandemic does not have any proven prevention or cure as of 20th April 2020. Every logical and evidence-based lead must be explored as an opportunity without bias. Homeopathy has offered some positive leads based on evidence found in laboratory models, animal models, human trials and clinical experience of the last two centuries. 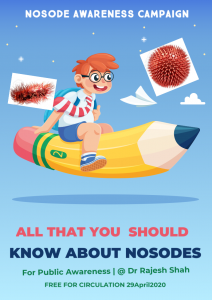 In fact, homeopathy became popular due in Europe due to its success in treating epidemic diseases such as cholera, yellow fever, and typhus.[i]

Despite the limitation of data in terms of quantity and quality, some of the evidence have been encouraging to explore more of homeopathy in the current COVID19 pandemic. More compelling studies would have certainly helped. I personally feel that this is the time to create more compelling evidence for now and the future, rather than undermining the importance of what is available.

The system of homeopathy based on the natural phenomenon called the law of similars, having over 1500 medicines used on the basis of their ability to produce disease like symptoms in toxic form, and treat similar diseases when used in very low ‘potentized’ dose, to the tune of nano-particles. One may like to compare it with the phenomenon ‘hormesis’ in biology as well with the principle behind vaccines, where disease-causing germs are ‘attenuated’ and administered for preventing infections.

97% of the entire population over one year of age was treated with a nosode that comprised four strains of inactivated leptospira. There was an 84% decrease in incidence as compared to the untreated group. 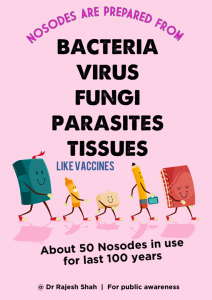 In Cuba, 25,000 patients who tested positive for dengue were treated with a homeopathic complex containing medicines Bryonia alba, Eupatorium perfoliatum, Gelsemium sempervirens, and Dengue nosode. As a result, no severe symptoms were reported after its administration, nor did any patient require any more intensive care from an average of 3 to 5 days of entering an Intensive Care Unit. Even the stay at the hospital reduced from 7–10 days to 3–5 days.

Experiments utilizing two different models- CAM model and suckling mice model, both conclusively indicated that this medicine has got a definite role in preventing Japanese Encephalitis.

A significantly shorter period of patent parasitemia was observed in the mice group treated with the specific nosode before infection than in the other groups. This group also had the lowest parasitemias values at 9, 13, 15 (p < 0.05), 17 (p < 0.05), 22, 24 and 28 days, a lower rate of mortality and a significant increase of lymphocytes compared to the infected control group.

The prevalence of Th1/Th2 response, spleen changes and megakaryocytes were investigated in BALB/c mice (n = 138) infected with Leishmania infantum, and treated with Leishmania infantum 30_ (10_30), a nosode. Pre/post and post-treatment presented a reduction of megakaryocytes/spleen changes due to immunomodulation animal process, controlling the infection process, probably by the Th1 cytokine predominance.

Antimalarial potential of Nosode 30 and 200 against Plasmodium berghei infection in BALB/c mice was observed in the mice model. Homeopathic nosodes exhibited 87.02 and 37.97% chemosuppression on Day 7 and mean survival time (MST) of 18.5 ± 2.16 and 16.5 ± 1.37 days respectively, which were statistically significant when compared to MST of infected control (8.55 ± 0.83 days). [

In an animal study on Influenza conducted by Brazilian scientists, Flow cytometry and morphometry revealed significant changes in T and B cell balance after influenza antigen challenge, varying according to treatment. The results show that homeopathic treatments with Influenzinum nosode and Thymulin induced subtle changes in acquired immune anti-viral response regulation.

Piglets of the homeopathic treated group had significantly less E. coli diarrhea than piglets in the placebo group (P<.0001), with E coli nosode. 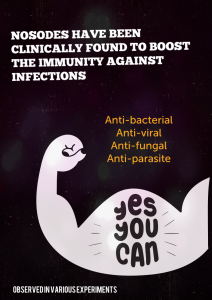 An in vitro study where the Influenza virus nosode-treated MDCK cells showed significant changes in 6-Phosphofructo-1-kinase activity. The effect of the nosode on TNF-a production by J774.G8 cells suggests a stimulatory effect on these cells, showing effects on the host cells, not on the virus particles or virus replication cycle.

An in vitro study by the author and team has shown anti-malarial activity of Plasmodium falciparum nosode. The hemozoin content was determined by measuring the absorbance at 400 nm. The results were recorded as % inhibition of heme crystallization compared to a negative control (DMSO). The P. falciparum nosode exhibited inhibition of hemozoin suggestive a potential antimalarial activity.

In vitro study, the homeopathic preparation Gripp-Heel (containing Aconitum,  Bryonia,  Eupatorium),  Lachesis and phosphorus) showed inhibitory activity against an exceptionally broad spectrum of virus strains, including enveloped as well as non-enveloped viruses of both DNA and RNA varieties.[xxii]

An observational study with thirty HIV infected patients were administered HIV Nosode in 30c potency over six months. The responder group had reduced viral load and increase in CD4 count.

A similar observation study with Hepatitis C infected patients demonstrated a decrease in viral load in the responder group.

Add on homeopathy in addition to standard therapy appears to improve outcome in a human trial in MDR-TB, shown in a study by CCRH, under the Ministry of AYUSH, Government of India. [xxv]

Well, the proven evidence of homeopathy as anti-viral, anti-bacterial, anti-microbial in cell-lines, animals, and human models are enough clues for the exploration of common homeopathic anti-microbial medicines as well as the nosodes against Covid19 pandemic now, and in future.

[iv] The Journal of the American Institute for Homeopathy, May 1921, page 1038 https://www.ecampnd.com/homeopathy/A_Chorus_of_Fifty_in_Harmony.pdf

[xxii] Glatthaar-Saalmüller B. In vitro evaluation of the antiviral effects of the homeopathic preparation Gripp-Heel on selected respiratory viruses. Can J Physiol Pharmacol. 2007 Nov;85(11):1084-90. https://www.ncbi.nlm.nih.gov/pubmed/18066110